South Western Ontario Regional Wado Karate-Do originally began in Waterford, Ontario over 25 years ago. The organization was incorporated in 1993 under the  direction of Lawrence Blakemore (7th Dan) who is a direct student of Masura Shintani Sensei.

Sensei Blakemore also holds a 5th Degree Black Belt in Shindo and was one of the main participants in structuring Shindo for MAPDA.  Sensei Blakemore is a member of the MAPDA Board, the governing body for the Martial Arts Promotional and Development Association (MAPDA).

In joining the Hagersville Wado Kai Club you also become a member of  SWOR,  which means that you are free to also attend classes at any of the SWOR clubs,  including: 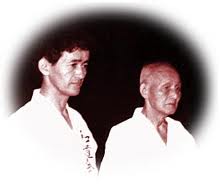 Karate was originally developed as the ultimate form of unarmed  self-defence. Through the years it has transformed into a popular sport  that can be practiced on your own or with a group. It can be as  competitive as you want or strictly for self-appreciation. Some aspects can be practiced in a very limited area. Various types of equipment are available but are not a necessity.

The benefits of Karate are numerous. It is an excellent form of physical conditioning, which helps develop speed and endurance as well as balance, co-ordination, and flexibility. Many students train in Karate as a supplement to other activities, such as sports that are seasonal in nature.

If personal growth is desired, Karate can be a means of gaining self understanding, of establishing contact with one's own body, and ultimately, it can become, for the dedicated student an art form through which one can express his or her own individuality.

It should be noted that the breaking of boards, bricks, or tiles is not a part of the traditional Karate and that, except for demonstration purposes, this type of sensationalism is not practiced in the club. Karate provides the exercises essential for the strengthening of the cardiovascular and respiratory systems.

What is Wado-Kai?
Wado is a Japanese karate style founded in 1939 by Hironori Otsuka. Wado kai or ryu, meaning the "way of peace and harmony", is one of the four major styles of karate in Japan and perhaps the purest form of karate-do (the way of the empty hands).

What is Shindo?
Sensei Masaru Shintani is the founder of the Shintani Karate Shindo Federation of North America. Sensei Masaru Shintani developed Shindo from the hanbo (3 foot staff) jutsu techniques of his samurai ancestors, the Matsumoto clan of Japan. Shindo is now a modern martial art practiced around the world. It was primarily developed for defensive tactics for law enforcement agencies but has been adopted by various traditional martial artists. The Shindo stick is 1.25" in diameter, 3 feet long with rounded ends. It is made from either oak (preferably) or maple and is normally painted black. Sensei Shintani has now certified over 1200 black belts in Shindo.

Shindo is a stick form utilizing striking, thrusting, blocking techniques, as well as locking or control techniques. As with all good martial arts kihon (basic) drills are practiced regularly as well as kihon kumite (pre-arranged sparring) drills, kata and jiyu kumite (free sparring). A specially designed foam covered Shindo stick is utilized for both kihon kumite and jiyu kumite. For safety, head protection is also used for these drills. A hockey helmet with appropriate faceguard is
acceptable.

Women in Karate
Women are especially encouraged to participate. All women should know what to do if attacked. It takes several years of serious and consistent training to learn how to adequately defend oneself and it is foolish to believe that a few tricks learned from a self-defence book or in a crash course is enough.

While women receive the same training as men, they are not expected to posses the same strength. Physical strength, though helpful, is not a critical factor in learning Karate. Indeed, women may find themselves progressing faster in some areas than the male students.

In addition to the self-defence aspect, Karate is an excellent form of weight control and figure training. Unlike many other sports, Karate helps to tone muscles, rather than develop them. However, this is not the most important feature Karate can offer. Recently, women have become more aware of, and concerned about their health. Karate provides the exercises essential for the strengthening of the body systems which most determine one's state of health; the cardio-vascular and respiratory systems.

Children in Karate
Through karate children learn to respect others while at the same time they build self confidence that helps them to cope at home and in school. Children are very different to teach from adults and putting them apart from adult classes, they can get the attention they need. Children are very active and playful. They have that need to learn, to discover, to experiment. From the various exercises combined with games they improve their co-ordination, their balance and their attention span. Students will be able to participate in non-contact tournaments. 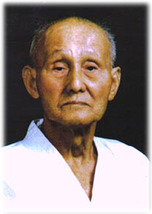 Some Facts about Wado-Kai
Sensei Ohtsuka
Wado-Kai is Canada's largest martial arts organization under one style.

Wado-Kai Japanese Karate style was founded in 1939 by Hironori Ohtsuka, Wado-Kai,  meaning "WAY TO HARMONY", is one of the four major Japanese Karate Styles and  perhaps the purest form of karate-do. 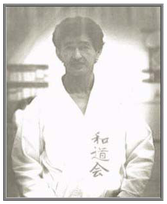 Mr. Shintani was a direct student of Ohstuka Sensei, and was supreme instructor  of Wado-Kai Karate in North America.  Sensei Shintani passed away May,  2000.


Wado-Kai, meaning "THE WAY TO PEACE AND HARMONY"  is one of the five major  styles in karate.  It is a fast
and fluid style emphasing body shifting to  evade an attack.  Blocking movements are often transformed instantly into  attacks.

Karate-do, for Ohtsuka, was primarily a spiritual discpline. "Violent action may  be understood as the way of martial arts, but the true meaning of martial arts  is to seek and attain the way of peace and harmony."

The aim of Wado-Kai Karate is to develop a mind that is tranquil yet alive, able  to react intuitively and without
hesitation to any situation.

As skill and knowledge are acquired through training and concentration of  effort, the student of Wado-Kai develops inner strength and calmness of  character as well as the virtues of self-control, respect for others, and true  humility. 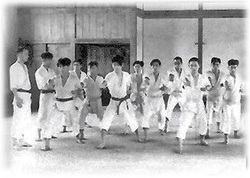 Master Hironori Otsuka
Mei Jin (b1892-1982)
Master Hironori Otsuka was born June 1, 1892 in Shimodate, Japan where his father, Dr. Tokujiro Otsuka, operateda clinic. As a boy he listened to a samurai warrior, his mother's uncle, tell thrilling stories of samurai exploits.This may well have been where the first seeds were sown that would later be some of the guiding principles andphilosophies of Wado karate.

Otsuka Sensei began martial arts training at five-years of age under his  great uncle Chojiro Ibashi, and by age thirteen, was formally  studyingshindo yoshinryu jujutsu, a traditional Japanese martial art  from which modern judo was derived, under Yokiyoshi Tatsusaburo Nakayama.  Whereas most schools at that time stressed throwing or grappling techniques, this  school stressed atemi (striking and kicking techniques). His martial arts  training continued evenwhen, in 1911, he entered Waseda University to study  business administration. It was during this period that masterOtsuka began  studying atemi-style Toshin-Kenpo, while he continued his studies in shindo  yoshinryu. When his fatherdied in 1913 he was forced to quit school and return  to Shimodate to work in a bank.

By 1921, at the relatively young age of 29, he was awarded the coveted menkyo-kaiden,designating him the successor as master of this style. A year later he began karate training under Gichin Funakoshi,the man who introduced karate to Japan from Okinawa. Otsuka Sensei had heard of Funakoshi's visit to Japan andjourneyed to Tokyo to witness the demonstration. Later, when Funakoshi decided to stay in Japan and teach karateat the Meishojuku Gymnasium, Otsuka Sensei asked to stay and study with him. In 1927 he left the bank at Shimodate,and became a medical specialist treating martial arts injuries in order to devote more time to the martial arts.In 1929 he started the first karate club at Tokyo University, and the next five years would see him establish clubsin many other universities as one of Funakoshi's most senior students.  During this time, Otsuka Sensei also hadthe opportunity to study with other  prominent karate stylists of the time, including Kenwa Mabuni of  the shito-ryu style, and Choki Motobu, who was known  for his emphasis on kumite andthe Naihanchi kata.

However, Otsuka Sensei eventually began disagreeing with Master Funakoshiover developmental issues, particularly Otsuka Sensei's desire to develop free sparring drills, which Funakoshidenounced as an impurity in karate training, with a potential for great injury due to the deadly nature of somekarate techniques. By the early 1930's Otsuka Sensei eventually parted company with Funakoshi, and traveled toOkinawa to learn more deeply of karate from the masters who had instructed Funakoshi. It was his belief that Funakoshihad over-simplified and over-modified several karate techniques and katas in the interests of teaching large groupsof beginners. Otsuka Sensei combined knowledge  of Funakoshi's karate with his new knowledge of Okinawan karate,and added  several of his own adaptations from Japanese bushido (the way of the  warrior) martial arts toform Wado karate.

Otsuka Sensei eventually opened his own dojo as the Dai Nippon Karate  Shinko club in 1934.According to records published by Shintani & Reid (1998),  the name changed to Dai Nippon Karate-do Shinbu-Kai,then to Ko-Shu Wado-Ryu  Karate Jutsu, which was subsequently shortened to Wado-Ryu Karate Jutsu,  followed finallyby Wado Ryu. Otsuka Sensei registered Wado karate in 1940 at  Butokukai, Kyoto, and it has become one the four majorstyles of Japanese karate,  the others being: Shotokan, Shito, and Goju. In the same year, Otsuka Sensei  organizedthe All Japanese Karate-do Federation, Wado-Kai, which serves as the  worldwide sanctioning body for Wado karateand it's affiliates. As early as 1934  he had developed rules and regulations for competitive free sparring to  beincorporated into his system, the first karate style to do so. These rules  have been wholly or partially adoptedby virtually all modern martial arts  competitions.

In 1966, Otsuka Sensei received the Kun-Go-To, or "The Fifth  Order of Meritof the Sacred Treasure" from the Emperor of Japan, who also  bestowed upon him the Soko Kyokujitsu-Shomedal for Otsuka Sensei's  contributions to the development and promotion of karate. In 1972, he received  the ShodaiKarate-do Meijin Judan or "First Generation Karate-do Master  of the Tenth Dan", as was designatedthe head of all martial arts systems within  the All Japan Karate-do Federation. Otsuka Sensei passed away on January29,  1982, after which Wado karate separated into several organizations based upon  differences in leadership andteaching concepts. 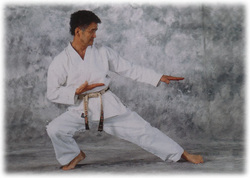 He was first exposed to karate by a man named Kitagawa while living in a  Japanese-Canadian internment camp in British Columbia during the Second World  War. In the mid-1950's, while competing in and eventually winning the championship in large All Japan Karate Federation tournaments in Tokyo, Sensei  Shintani met and began to train under Sensei Ohtsuka. During the 1970's, Sensei  Ohtsuka placed Sensei Shintani in sole charge of the teaching of Wado kai in  North America. The Shintani Karate Federation of Wado Kai, centered in his home  in Hamilton, Ontartio, is presently one of the largest martial arts organization  under a single style in North America. Sensei Shintani has approximately 14,000  students in his organization and has graded over 1200 black belts.